Time to try visible veg, keep it loud and proud..

Cook School founder Amanda Grant on why she likes to keep veg loud and proud on childrens’ plates. 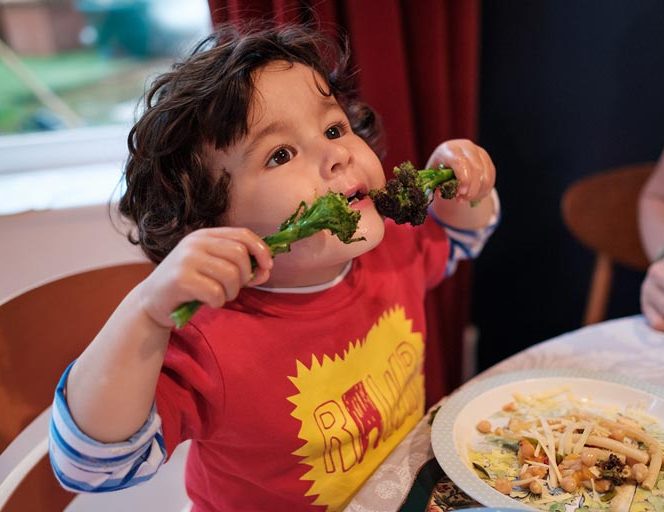 It’s a time-honoured way of sneaking vegetables into children’s meals. Chop them up into tiny pieces, we’re told, and they won’t even know they’re in the Bolognese or stew we’re serving up. And of course, getting our children to eat more vegetables is fantastic for their health. But are we doing them a disservice by hiding them?

Children are already losing touch with where their food comes from – a 2015 survey of 1,000 children aged 5 to 11 by farming organisation Linking Environment And Farming (LEAF) showed that 5% think strawberries grow in the fridge, while 28% were unaware that carrots grow in the ground.

When we avoid putting whole vegetables on our children’s plates, we create even more mystery around them, instead of treating them like everyday foods they’ll learn to reach for instinctively as part of a delicious, balanced diet.

We’re also told we should ‘eat the rainbow.’ Enjoying a variety of different-coloured fruit and vegetables, from red radishes through yellow peppers to purple aubergines, keeps our diet varied and interesting and our bodies healthy. So why hide that rainbow by making vegetables unidentifiable?

Getting as much veg as possible into a dish is a fantastic way of helping children towards their five a day. But I also believe it’s important to include whole vegetables with every meal – even if that pasta sauce alongside them is crammed with hidden ones.

It can be as simple as adding some frozen peas and tinned sweetcorn to their plates, or some fingers of carrot and cucumber. If children see vegetables at every meal, they’ll get used to it. And if they protest, keep going!

We’re lucky enough to have access to fresh, tasty veg from around the world in every supermarket, and if you persevere you’ll eventually find something even the pickiest child genuinely enjoys eating.

Getting them involved in choosing and preparing vegetables is a great way of getting them interested in and familiar with them before they even arrive on their plates – which is one of the key philosophies of Cook School.

When my three were little, they would sit washing carrots, even if they didn’t need washing – and always eat the ones they’d washed. Getting them involved and feeling proud of what they’d achieved was enough to make them want to eat the fruits (and veg) of their labour.

At the supermarket, you could ask children to choose a vegetable from each colour of the rainbow – or even print out a chart for them to fill in (like this one from Veg Power supporter Dr Rangan Chatterjee) and let them help with meal planning.

And it goes without saying that you should set an example by piling your plate high with visible veg too. One study found that the eating behaviour of parents or other caregivers has the biggest impact on what children will eat. It’s far more important to eat well yourself, than simply telling children that’s what they should do.

The Veg Power campaign, which is backed by celebrities including Jamie Oliver and Hugh Fearnley Whittingstall (and, of course, by Cook School), is trying to encourage advertisers to spend more on marketing vegetables to children. It aims to inspire kids and support parents who know how important they are to our health.

But we can all do our bit. And that includes keeping vegetables in their rightful place – loud and proud on our children’s plates, not hidden away in the background.

Cook School is committed to using fresh, seasonal vegetables in our recipes, and teaching children how to cook and enjoy them for life.